Digitalis has extensive experience in designing, building and maintaining data streaming systems across a wide variety of use cases. Often in financial services, government, healthcare and other highly regulated industries.

This blog is intended to aid readers’ understanding of how Apache Kafka as a technology can support enterprises in meeting regulatory standards and compliance when used as an event broker to Security Information and Event Management (SIEM) systems.

As businesses continue to grow in complexity and embrace more and more diverse, distributed, technologies; the risk of cyber-attacks grows. This brings its own challenges from both a technical and compliance perspective; to this end we need to understand how the adoption of new technologies impact cyber risk and how we can address these through the use of modern event streaming, aggregation, correlation, and forensic techniques.

Apart from the technical considerations of any event management or SIEM system, enterprises need to understand regional legislation, laws and other compliance requirements. Virtually every regulatory compliance regime or standard such as GDPR, ISO 27001, PCI DSS, HIPAA, FERPA, Sarbanes-Oxley (SOX), FISMA, and SOC 2 have some requirements of log management to preserve audit trails of activity that addresses the CIA (Confidentiality, Integrity, and Availability) triad.

We need to look beyond the traditional view of data and logging, in that things happen, and you process that event which produces data, you then take that data and put it in a log or database for use at some point in the future.  However, this no longer meets the security needs of modern enterprises, who need to be able to react quickly to security events.

In reality all your data is event streamed, where events happen, be it sensor readings or a transaction requests against a business system.  These events happen and you process them, where a user does something, or a device does something, typically these events fall firmly in the business domain. Log files reside in the operational domain and are another example of event streams, new events can be written to the end of a log file, aka an event queue, creating a list of chronological events.

What becomes interesting is when we’re able to take events from the various enterprise systems, intersect this operational and business data and correlate events between them to provide real-time analytics. Using Apache Kafka, KSQL, and Kafka Connect, enterprises are now able to manipulate and route events in real-time to downstream analytics tools, such as SIEM systems, allowing organisations to make fast, informed decisions against complex security threats. 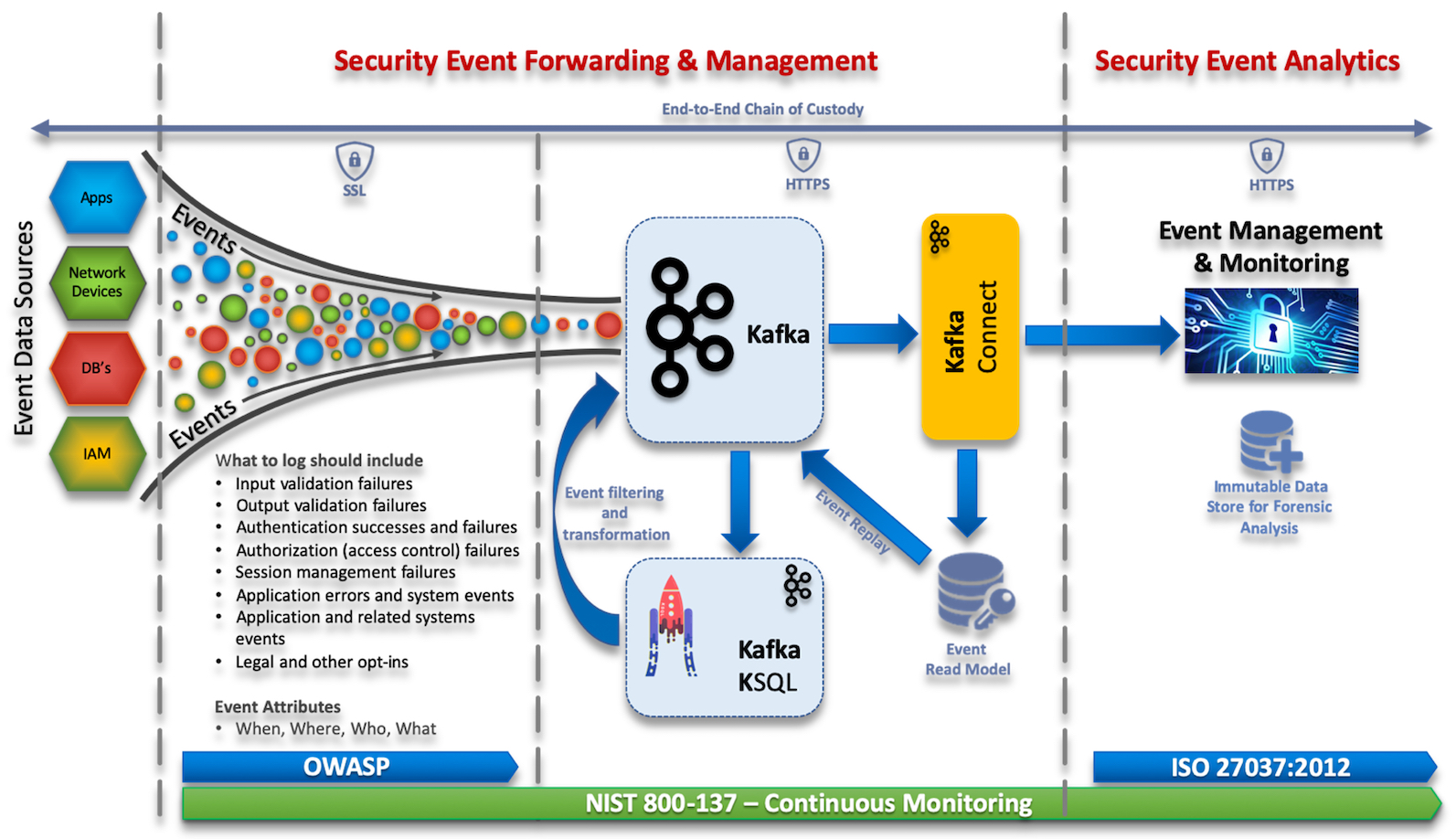 The ability to secure event data end-to-end, from the time it leaves a client to the time it’s streamed into your event management tool is critical in guaranteeing the confidentiality, integrity and availability of this data.  Kafka can help meet this by protecting data-in-motion, data-at-rest and data-in-use, through the use of three security components, encryption, authentication, and authorisation.

For example, to secure client/broker communications, we would:

Securing data-at-rest, Kafka supports cluster encryption and authentication, including a mix of authenticated and unauthenticated, and encrypted and non-encrypted clients.

In order to be able to perform effective investigations and audits, and if needed take legal action, we need to do two things. Firstly, prove the integrity of the data through a Chain of Custody and secondly ensure the event data is handled appropriately and contains enough data to be Compliant with Regulations.

It’s critical to maintain the integrity and protection of digital evidence from the time it was created to the time it’s used in a court of law. This can be achieved through the technical controls mentioned above and operational handling processes of the data. Any break in the chain of custody or if the integrity of the data is not preserved, including any time the evidence may have been in an unsecured location, may lead to evidence presented in court being challenged and ruled inadmissible.

ISO 27037:2012 – provides guidelines for specific activities in the handling of digital evidence, which are identification, collection, acquisition and preservation of potential digital evidence that can be of evidential value.

What do we mean when we say Compliant?

This is not an easy question to answer and is dependant on the market sector and geographic location of your organisation (or in some instances where your data is hosted), as this will determine the compliance regimes that need to be followed for IT compliance. There are some commonalities between the regulative bodies for IT compliance, as a minimum you would at least have to:

The focus of IT compliance is ensuring due diligence is practiced by organisations for securing its digital assets. This is usually centred around the requirements defined by a third party, such as government, standards, frameworks, and laws. Depending on the country in which your organisation is based there are several regulation acts that require compliance reports:

This framework clearly states that organisations must ensure they develop best practices in log management of their security operations, ensuring they are kept in sufficient detail to meet audit and compliance requirements.

Essentially, organisations must demonstrate their processes for confidentiality, integrity, and availability when it comes to information assets.

The General Data Protection Regulation (GDPR) is a legal framework that sets guidelines for the collection and processing of personal information from individuals who live in the European Union (EU).

GDPR explains the general data protection regime that applies to most UK businesses and organisations. It covers the General Data Protection Regulation as it applies in the UK, tailored by the Data Protection Act 2018.

Any system would need to demonstrate demonstrable compliance with GDPR Article 25 (Data protection by design and by default) and article 32 (Security of processing). 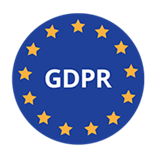 To become compliant, small to medium size organisations should:

HIPAA
(US legislation for data privacy and security of medical information)

The Health Insurance Portability and Accountability Act (HIPAA), is a US law designed to provide privacy standards to protect patients’ medical records and other personal information. There are two rules within the ACT that have an impact on log management and processing, the Security Rule and the Privacy Rule.

The HIPAA Privacy Rule establishes national standards to protect individuals’ medical records. The Rule requires appropriate safeguards to protect the privacy of personal health information and sets limits and conditions on the uses and disclosures that may be made of such information without patient authorisation.

According to the act, entities covered by it must: 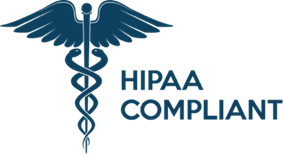 FISMA
(US framework for protecting information)

FISMA states that “any federal agency document and implement controls of information technology systems which are in support to their assets and operations.” The National Institute of Standards and Technology (NIST) has developed further the guidance to support FISMA, “NIST SP 800-92 Guide to Computer Security Log Management”. 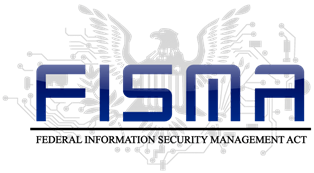 FERPA (Family Educational Rights and Privacy Act of 1974) is federal legislation in the United States that protects the privacy of students’ personally identifiable information (PII), educational information and directory information. As far as IT compliance is concerned, there are several activities your organisations can implement to support compliance:

Implementation of a SIEM and log management tools can support organisation in achieving FERPA compliance. 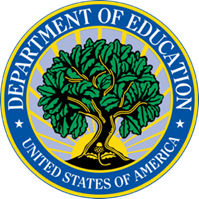 There are three types of SOC reports, but SOC 2 focuses explicitly on the security protecting financial transactions. SOC 2 compliance requires organisations to submit a written overview of how their system works and the measures in place to protect it. External auditors assess the extent to which an organisation complies with one or more of the five trust principles based on the systems and processes in place. 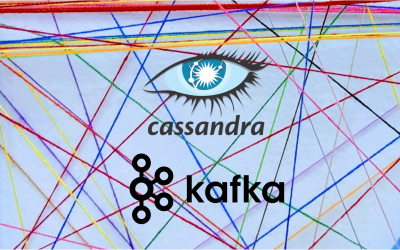