It is all too easy to create a Kafka cluster and let it be used as a streaming platform but how do you secure it for sensitive data? This blog will introduce you to some of the security features in Apache Kafka and provides a fully working project on Github for you to install, configure and secure a Kafka cluster.

If you would like to know more about how to implement modern data and cloud technologies into to your business, we at Digitalis do it all: from cloud and Kubernetes migration to fully managed services, we can help you modernize your operations, data, and applications – on-premises, in the cloud and hybrid.

We provide consulting and managed services on wide variety of technologies including Apache Kafka.

Contact us today for more information or to learn more about each of our services.

One of the many sections of Kafka that often gets overlooked is the management of topics, the Access Control Lists (ACLs) and Simple Authentication and Security Layer (SASL) components and how to lock down and secure a cluster. There is no denying it is complex to secure Kafka and hopefully this blog and associated Ansible project on Github should help you do this. 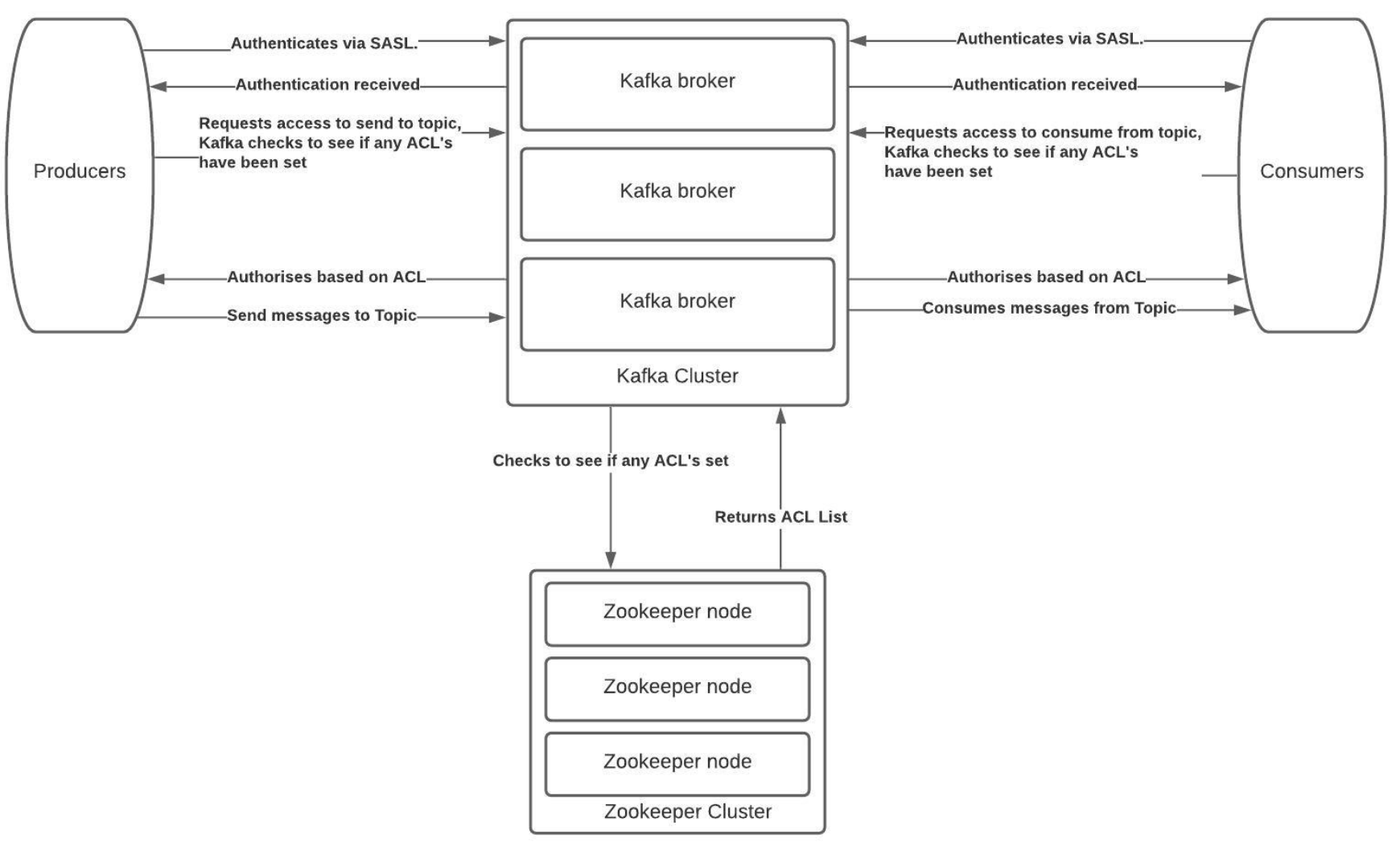 At Digitalis we focus on using tools that can automate and maintain our processes. ACLs within Kafka is a command line process but maintaining active users can become difficult as the cluster size increases and more users are added.

As such we have built an ACL and SASL manager which we have released as open source on the Digitalis Github repository. The URL is: https://github.com/digitalis-io/kafka_sasl_acl_manager

The Kafka, SASL and ACL Manager is a set of playbooks written in Ansible to manage:

Kafka is an open source project that provides a framework for storing, reading and analysing streaming data. Kafka was originally created at LinkedIn, where it played a part in analysing the connections between their millions of professional users in order to build networks between people. It was given open source status and passed to the Apache Foundation – which coordinates and oversees development of open source software – in 2011.

Being open source means that it is essentially free to use and has a large network of users and developers who contribute towards updates, new features and offering support for new users.

Kafka is designed to be run in a “distributed” environment, which means that rather than sitting on one user’s computer, it runs across several (or many) servers, leveraging the additional processing power and storage capacity that this brings.

Kafka ships with a pluggable Authorizer and an out-of-box authorizer implementation that uses zookeeper to store all the ACLs. Kafka ACLs are defined in the general format of “Principal P is [Allowed/Denied] Operation O From Host H On Resource R”.

Ansible is a configuration management and orchestration tool. It works as an IT automation engine.

Ansible can be run directly from the command line without setting up any configuration files. You only need to install Ansible on the control server or node. It communicates and performs the required tasks using SSH. No other installation is required. This is different from other orchestration tools like Chef and Puppet where you have to install software both on the control and client nodes.

The Java Authentication and Authorization Service (JAAS) was introduced as an optional package (extension) to the Java SDK.

JAAS can be used for two purposes:

Setup the inventories/hosts.yml to match your specific inventory

Once the above has been set as configuration for Kafka and Zookeeper you will need to configure and setup the topics and SASL users. For the SASL User list it will need to be set in the group_vars/kafka_brokers.yml . These need to be set on all the brokers and the play will configure the jaas.conf on every broker in a rolling fashion. The list is a simple YAML format username and password list. Please don’t remove the admin_user_password that needs to be set so that the brokers can communicate with each other. The default admin username is admin.

In the group_vars/all.yml there is a list called topics_acl_users. This is a 2-fold list that manages the topics to be created as well as the ACL’s that need to be set per topic.

There are 2 components to a topic and that is a user that can Produce to or Consume from a topic and the list splits that functionality also.

Run the playbooks/base.yml file to install SSH Keys and OpenJDK. If applicable to any.
They can individually be toggled on or off with variables in the group_vars/all.yml
install_ssh_key: true
install_openjdk: true

Once the above has been set up the environment should be prepped with the basics for the Kafka and Zookeeper install to connect as root user and install and configure.
They can individually be toggled on or off with variables in the group_vars/all.yml
The variables have been set to use Opensource/Apache Kafka.
install_zookeeper_opensource: true
install_kafka_opensource: true

Once kafka has been installed then the last playbook needs to be run.
Based on either SASL_PLAINTEXT or PLAINTEXT configuration the playbook will

Please note that for ACL’s to work in Kafka there needs to be an authentication engine behind it.

If you want to install kafka to allow any connections and auto create topics please set the following configuration in the group_vars/all.yml
configure_topics: false
kafka_auto_create_topics_enable: true

This will disable the topic creation step and allow any topics to be created with the kafka defaults.
Once all the above topic and ACL config has been finalised please run:
ansible-playbook playbooks/configure_kafka.yml -i inventories/hosts.yml -u root

You can either run a producer or consumer on the Kafka broker you have set or you can use a third party tool to send logs. In this test we have used Metricbeat to output onto Kafka.

As part of the ACL play it will create a default kafkaclient.jaas.conf file as used in the examples above. This has the basic setup needed to connect to Kafka from any client using SASL_PLAINTEXT Authentication.

This project will give you an easily repeatable and more sustainable security model for Kafka.

The Ansbile playbooks are idempotent and can be run in succession as many times a day as you need. You can add and remove security and have a running cluster with high availability that is secure.

For any further assistance please reach out to us at Digitalis and we will be happy to assist.